Hello. I’m struggling with the Windows update error code 0x80073712 fixes in Windows 10 for a couple of days. I’ve found some fixes related to this bug on Google, but, apparently, they apply to Windows XP and 7, which is not suitable in my case. Could someone please provide me with at least some ideas on how this update error could be resolved? Many thanks!

Microsoft releases Windows updates on a regular basis. That’s a crucial procedure, which enables Microsoft engineers to maintain Windows OS, fix old and ‘fresh’ errors, BSOD[1], repair security loopholes if there are any, root new system functions step-by-step, and so on. Therefore, each Windows OS update should be installed.

Unfortunately, but Windows 10 Updates often cause serious install issues, for example, Windows Update service does not find updates even though the user knows for sure that one has been released, the installation of an update freezes or is rolled back automatically.[2]

One of the current Windows 10 Update errors is 0x80073712, which signifies an ERROR_SXS_COMPONENT_STORE_CORRUPT. This bug check has affected Windows 10 OS when trying to install cumulative update KB3194798 in particular, which has been released on October 11, 2016. Nevertheless, it shows a tendency to prevent installation of Windows apps and other updates.

ERROR_SXS_COMPONENT_STORE_CORRUPT
14098 (0x3712)
The component store has been corrupted.

Unfortunately, there are no official fixes provided on the Internet, but we believe that Microsoft engineers are already aware of it and work with its solution. Until 0x80073712 error fixes or a patch will be released, you may try the methods that we’ve come up with. When the particular issue gets fixed the best solution is to Update the OS with a bug-free version. 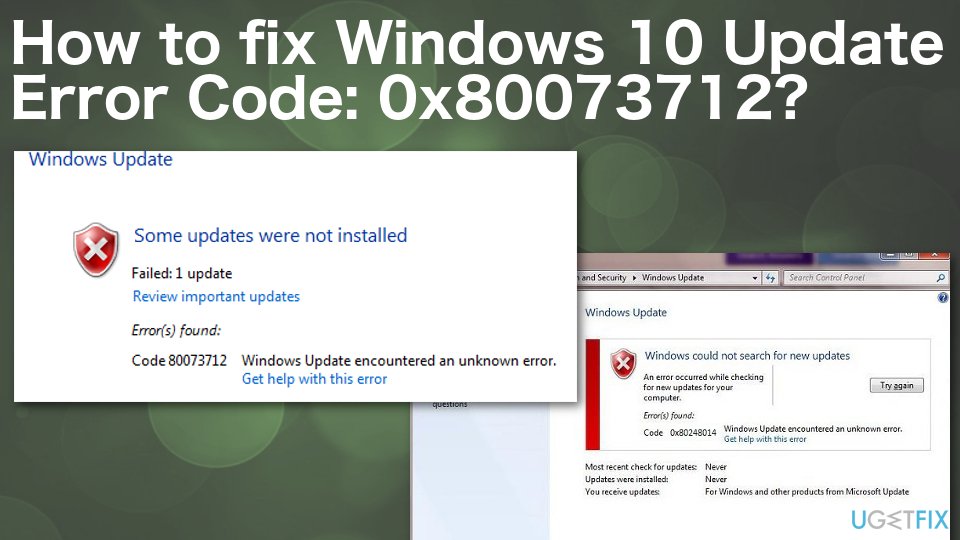 It is assumed that ERROR_SXS_COMPONENT_STORE_CORRUPT bug may be triggered by some internal system malfunctions, such as damaged registry keys or corrupted system files.[3] Therefore, we would highly recommend you to perform a full system scan with ReimageMac Washing Machine X9 or another PC optimization tool. NOTE that Reimage has an in-built antivirus system, so it will remove and protect OS from malware.

Olivia Morelli is a young, but a perspicacious IT expert who is currently just a year away from a Bachelor’s Degree in Software Systems. Her primary passion is cyber security, however, thanks to her detailed understanding of computer networks, operating systems and hardware, she can find a fix for any PC or Mac issue...