How to fix “Failed to get player information from the server” error?

Issue: How to fix “Failed to get player information from the server” error?

Hello. For some reason, I can't launch Pokemon GO. Instead I receive the “Failed to get player information from the server” error. Is there anything I can do to play the game smoothly? Thanks in advance.

Originally created by game designer Satoshi Tajiri (Nintendo) in 1990, the Pokemon franchise became a global phenomenon, recognized and loved by millions of fans around the world. To no surprise, Pokemon GO was a highly anticipated title when it came out back in July of 2016, published by American company Niantic. Millions of users grabbed their Android phones or iPhones and rushed to the streets to catch 'em all.

Pokemon Go got around 1.3 million downloads just within a week of being released and currently has over 600 million active users worldwide.[1] And while the game was a  tremendous success, it did have several setbacks right from its release, such as the “Failed to get player information from the server” issue.

Users also said that Pokemon Go failed to log in on multiple occasions, or that Pokemon GO failed to get game data from the server. As a result, many users were unable to enjoy the game, just like many others did, which was causing a lot of frustration among players. 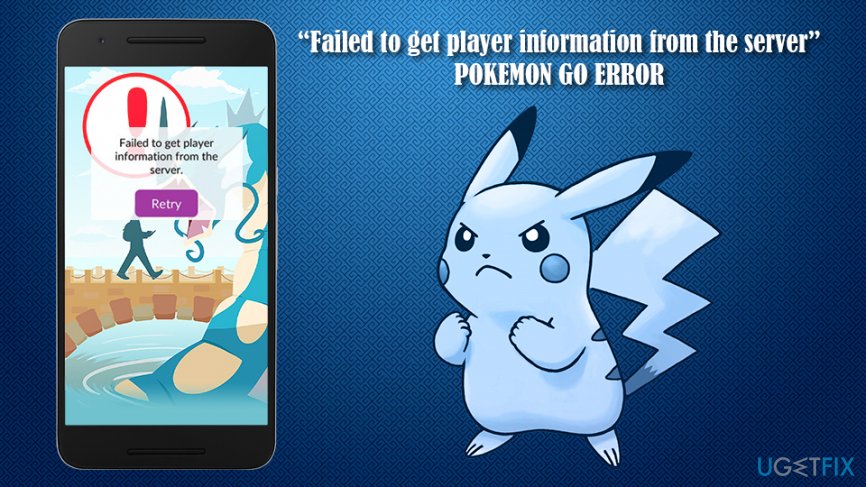 The game uses augmented reality with the help of a GPS and internet (3G or 4G) to allow users to walk around their local streets and catch Pokemon – otherwise known as pocket monsters. “Failed to get player information from the server”  is one of the reasons why users can't play the game since the issue is related to the GPS – it helps the game to track users' location, which is crucial for the gameplay.

The reason for this error is the failed attempt to get game data from the server of Pokemon GO, consequently preventing the account sync with the servers. While, in some cases, reasons for this issue can relate to servers themselves, there other client-related problems that could be the reason for Pokemon Go failed to login.

In this guide, we will show ways how to fix “Failed to get player information from the server” error manually, so follow each step below carefully. Additionally, we recommend using Reimage to organize and make your phone run smoothly.

The easiest way to fix “Failed to get player information from the server” error is to remove the app and reinstall it. The steps below explain how to do it on Android:

To uninstall Pokemon GO from iPhone, follow these steps:

When dealing with errors like “Failed to get player information from the server,” it is important to understand that the reasons for it could be something out of your control. For example, Niantic acknowledged several times that the servers were overloaded and that the company is trying to deal with the issues:[2]

Thank you for your patience. We have been working to fix the server issues. We will continue rolling out #PokemonGO to new countries soon.

Thus, sometimes the servers might not be working well, and you will simply have to wait until everything is back to normal (experiencing technical difficulties is relatively common, even for huge companies that release AAA games).[3] Nevertheless, if Pokemon GO failed to get game data from the server, you could check its connection on http://ispokemongodownornot.com website. Note that the game is not eligible in all countries, so that might also be the reason for the “Failed to get player information from the server” error. 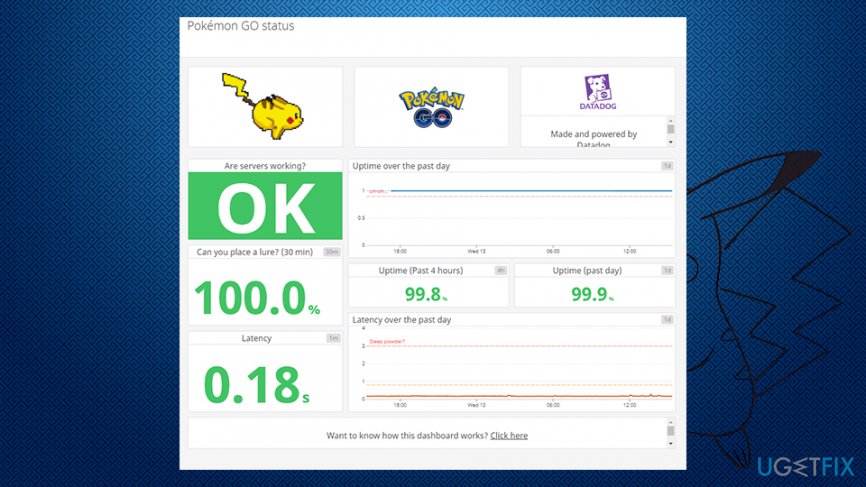 Jake Doe is a News Editor at Ugetfix. Since he met Ugnius Kiguolis in 2003, they both launched several projects that spread awareness about cybercrimes, malware, and other computer-related problems.

Kaip pašalinti “Failed to get player information from the server” klaidą?

What you can add more about the problem: "How to fix “Failed to get player information from the server” error?" Cancel reply