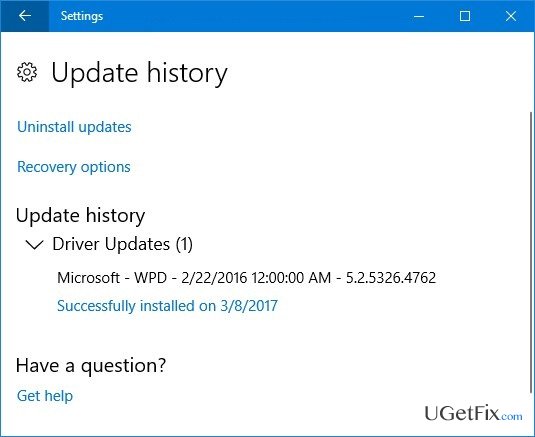 Yesterday Microsoft released an official warning addressing Windows 10 users who have installed driver updates on March 8, 2017. The company acknowledged that an incorrect device driver update had been released, which is listed as Microsoft – WPD – 2/22/2016 12:00:00 AM – 5.2.5326.4762 on the installed Windows Update list. While this update did not cause fatal damage to the devices, a small group of Windows 10 community reported that the faulty driver update block access to the connected phones of portable devices.

Microsoft has officially approved the fact that the incorrect driver update Microsoft – WPD – 2/22/2016 12:00:00 AM – 5.2.5326.4762 has been removed from Windows Update the same day. Nevertheless, the analysis had shown that a small group of Windows 10 users installed the update before it was removed. If you have doubts whether you have installed that update or not, click Win key + I top open Settings app, then open Update and Security, open Windows Update, and select Update History. If you find Microsoft – WPD – 2/22/2016 12:00:00 AM – 5.2.5326.4762 update included on the list, you will have to remove it to prevent system’ malfunctions.

Method 1. Revert driver’s changes and prevent the driver from reinstalling

After that, you should take some precautionary measures to prevent the faulty driver from reinstalling. For this purpose, please do the following:

Method 2. Use a System Restore Point

You can uninstall this program with the help of the step-by-step guide presented to you by ugetfix.com experts. To save your time, we have also selected tools that will help you carry out this task automatically. If you are in a hurry or if you feel that you are not experienced enough to uninstall the program by your own, feel free to use these solutions:

A VPN is crucial when it comes to user privacy. Online trackers such as cookies can not only be used by social media platforms and other websites but also your Internet Service Provider and the government. Even if you apply the most secure settings via your web browser, you can still be tracked via apps that are connected to the internet. Besides, privacy-focused browsers like Tor is are not an optimal choice due to diminished connection speeds. The best solution for your ultimate privacy is Private Internet Access – be anonymous and secure online.